Pskov is one of the most ancient cities of Russia. Pskov is located in the north-west part of Russia. It is the administrative center of Pskov Region and Pskov district. The city area is 95,6 km². The population of the city is about 209 840 people.

Within cities.multimodal the city of Pskov has planned to find solutions for better use of urban space, reducing the number of personal vehicles, as well as soultions for compact transport infrastructure allocating as much space as possible in the historical center of Pskov for citizens and city guests. For the city of Pskov it is equally important to gain experience and best practices from the European partners in the project.

The pilot area is the historical center of the city.

Within the boundaries of the pilot area many important for the life of the city organizations and places for people's recreation are concentrated (local and regional administration, branches of federal agencies, schools, universities, kindergartens). In addition, many parks and embankments of the two main rivers of Pskov are also within the boundaries of the historical center of city. 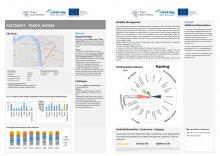 About Pskov and cities.multimodal in Russian