Kalmar is a typical Swedish coastal town at the Southern Baltic Sea implying sandy shores, a fair amount of erosion and plentiful of islands. The city has many open spaces due to the sea shaping islands, bays and stretches that lowers the density. Also buildings are mainly 2-4 stories which limit the density to 1,900 inhabitants/square km in the city and 70 inhabitants/square km in the municipality at large. Kalmar is strongly based on car use for daily transport and commuting, 85% of all car journeys are carried out by single driver.

Kalmar joined cities.multimodal with the aim to change their modal split by decreasing private motorised vehicles and increasing public transportation but also to promote biking and walking. One identified bottleneck for increasing biking and use of public transport (PT), is the current lack of safe and central bicycle storage opportunities along with the possibility to store personal belongings such as rain gear, helmets, minor purchases etc. Therefore Kalmar is looking to build a bicycle garage at the central station that offers all of the mentioned services. The bicycle garage will be developed hand-in-hand with the SUMP for the pilot area.

The expected result out of Kalmar's participation is that the SUMP would become an accepted method or process for the rest of the municipality and that the garage will foment both biking and PT by seamlessly connecting the two. Hopefully Kalmar will also see additional services being established, that would benefit from such a hub function and location.

Since infrastructure alone never can achieve a desired behavioral change Kalmar will work with mobility management to attain this with the large employers, the university in the city center and the municipal education department to decrease the parental taxis around the school areas.

The pilot area of Kalmar consists of the very most central parts and equals the Swedish term ”innerstadsområde” which spreads out on 0,28 sq. km. and accounts for 10,200 inhabitants. This area includes the commercial areas (excluding suburban shopping malls), the biggest employers and the new campus of the university which will be inaugurated in 2020. 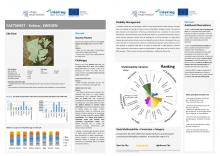 About Kalmar and cities.multimodal in Swedish